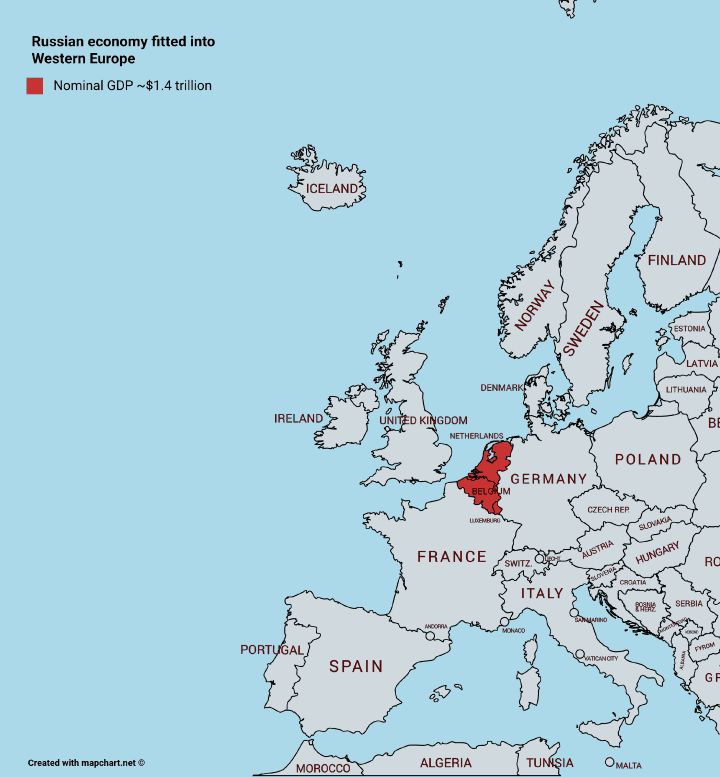 The map above shows the size of the Russian Economy (GDP) relative to Western European countries at nominal exchange rates.

On this basis the Russia economy is worth $1.4 trillion, making it the 12th largest in the world. Roughly equivalent to the GDPs of the Netherlands ($824 billion), Belgium ($492 billion) and Luxembourg ($64 billion) combined.

Yet, these 3 countries have a combined population of only 29 million compared to Russia’s 145 million.

However, nominal GDP is not always the best measure of these things, as it values the economy based on the exchange rate with the US dollar, rather than what you can actually buy in local currency.

Therefore, a better measure is to use purchasing power parity (PPP). On this basis, Russia looks much better with an economy of $4 trillion, making it the 6th largest in the world.

This is far larger than the combined PPP GDPs of the Netherlands ($908 billion), Belgium ($529 billion) and Luxembourg ($64 billion), which don’t really change that much.

Although, even on a PPP basis the Russian economy is only worth around the same as Germany’s (population 83 million) or just over 20% of the GDP of the United States.

A few other facts about Russia:

Enjoy this map? Please help by sharing it: