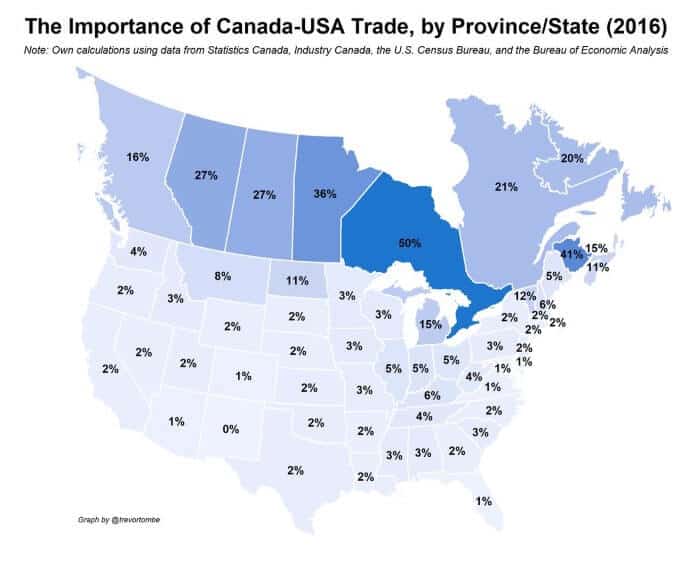 However, both sides would lose in a trade war, Canada just has more to lose than the US does.

Ontario, Canada’s largest province both in terms of population and GDP, has by far the most to lose with up to half of GDP being dependent on trade with the US.

Correction: This article originally stated that Maine would be the biggest loser in the US, but as many comments pointed out, we’ve confused Maine with New Brunswick.

The biggest potential loser in the US is Michigan at 15% of GDP, which is interesting considering Trump only won the state by around 10,000 votes.

Big states such as California and Texas each only rely on trade with Canada for 2% of the respective GDPs.

Now looking at the map above, you might think that US does not export a huge amount to Canada, but that’s not really true as the map below shows. 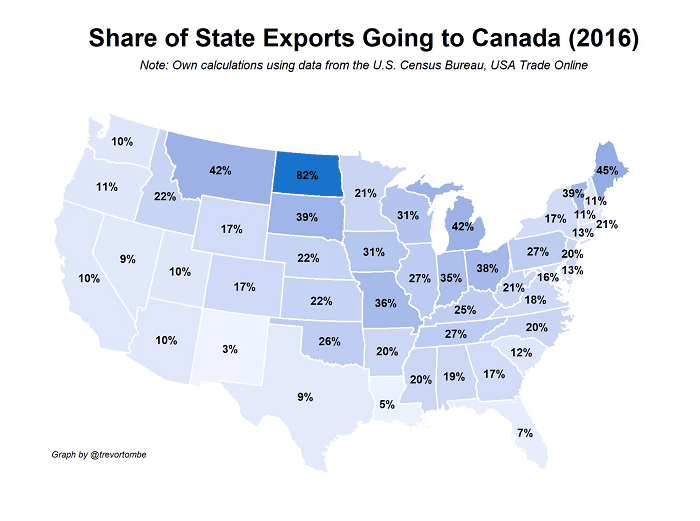 In fact the US exports about twice as much to Canada as it does to China. Yet, just over 18% of all US exports end up in Canada.

Canada’s situation is slightly different. 57% of all its exports go to the United States, which makes it rather worryingly dependent on its large neighbour to the South.

Given the relative populations and economic size, it’s not surprising that Canada probably needs the US more than the US needs Canada. Canada has a population of just over 36 million people compare to 325 million Americans (1/9th the population). But Canada’s GDP at $1.5 trillion USD is only around 1/12th that of the US’ $18.6 trillion USD.

What do you think? Leave your thoughts below and share this map with a friend: