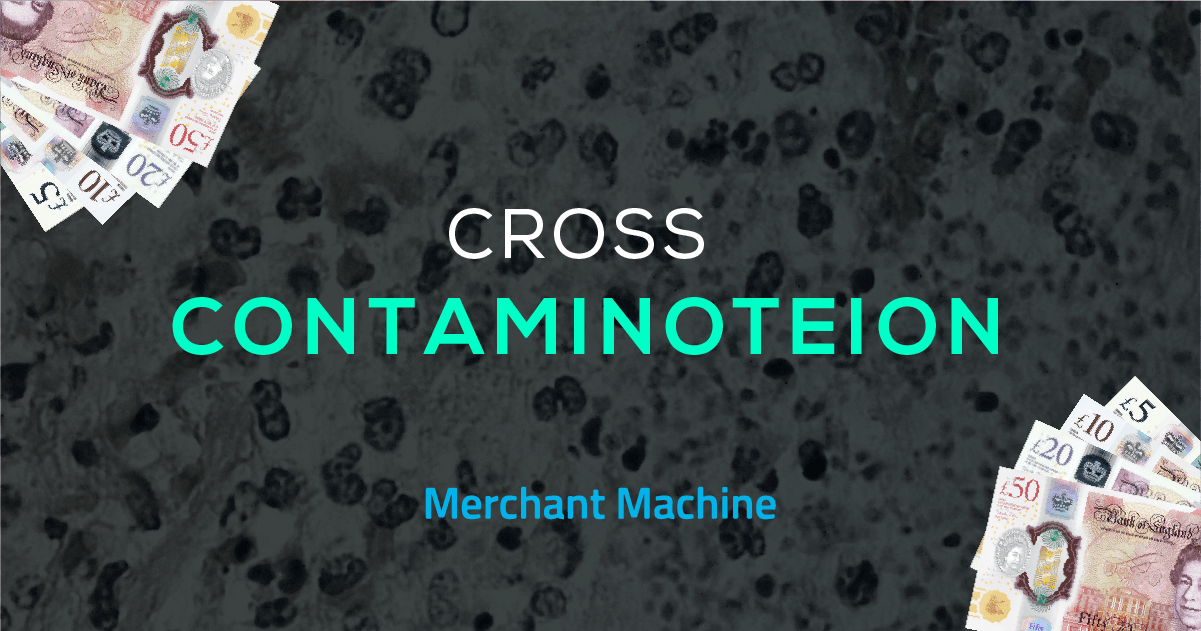 With the pandemic outbreak, people have become more conscious when it comes to personal interactions, social life and personal hygiene. The traditional greeting gesture of shaking hands has now been transitioned to elbow bumps.

Last year, the amount of cash transactions in the US and UK decreased significantly as a consequence of the COVID-19 outbreak, with more than a third of shoppers being stopped from paying with cash, in a collective effort to limit the spread of the virus.

Merchant Machine takes an in-depth look into the movement of cash to work out the velocity of money (measurement of the rate at which money is exchanged in an economy) in the UK and US economies as well as the average number of bacteria and different types that can be found on individual banknotes to reveal which ones are the ‘dirtiest’.

The £5 bank note accumulates around 153,000 different types of bacteria in 5 years

Studies show that over the last decade, cash withdrawals in the UK fell by 22%. According to the same study, in the last couple of years cash usage decreased even more. This, along with the recent pandemic outbreak, has seen small businesses going cashless for safety reasons, asking customers to pay with alternative methods such as debit and credit cards.

Even though this trend could potentially lead to 0% cash usage by 2026, cash transactions in the UK still correspond to 12.4% of the consumer expenditure.

To find out the dirtiest money in the UK’s economy we analysed how fast and far each banknote moves in the UK economy and the total number of hands each note sees in it’s lifespan to determine how many germs and bacteria are gathered on each type of banknote.

£5 is the dirtiest banknote with an average of 50.9 number of transactions, gathering almost 153,000 bacteria in its 5 years of circulation. There are 4 different kinds of harmful bacteria found on the £5 note, including Coliforms and Listeria.

The bacteria Coliform can be found in humans’ and animals’ waste and can cause symptoms include diarrhea, stomach cramps and vomiting. Listeria can be also found in human and animal feces and in soil.

As we can observe in the image below, the average £10 banknote is spent around 10.5 times in the course of its 5 year lifespan, gathering an average of 330 potentially harmful bacteria. The types of bacteria found include Listeria and Staphylococcus Aureus. This latter is known to be antibiotic resistant and it is considered extremely dangerous by the World Health Organisation (WHO). This bacteria can cause skin infections and badly affect blood and intestinal organs. 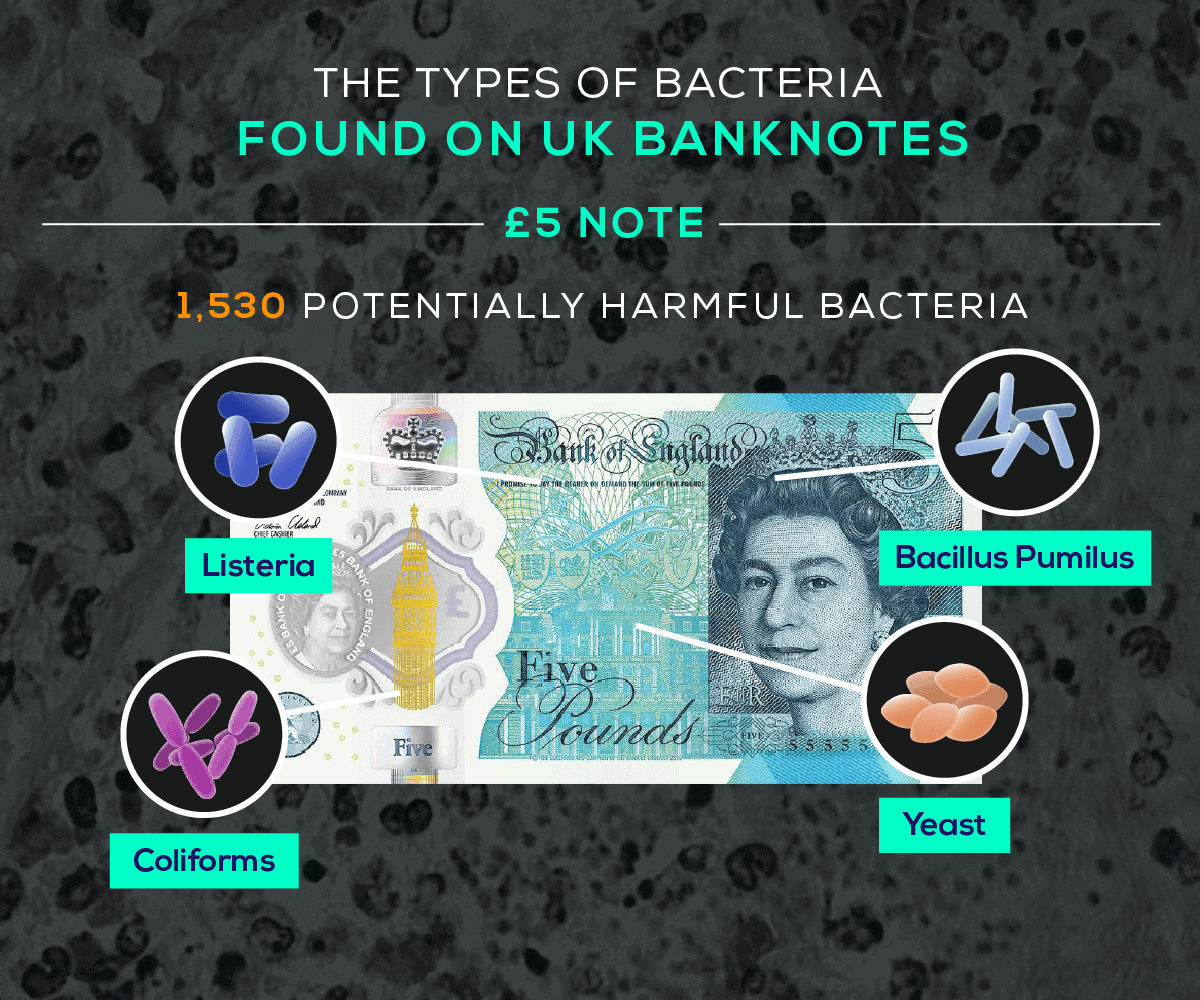 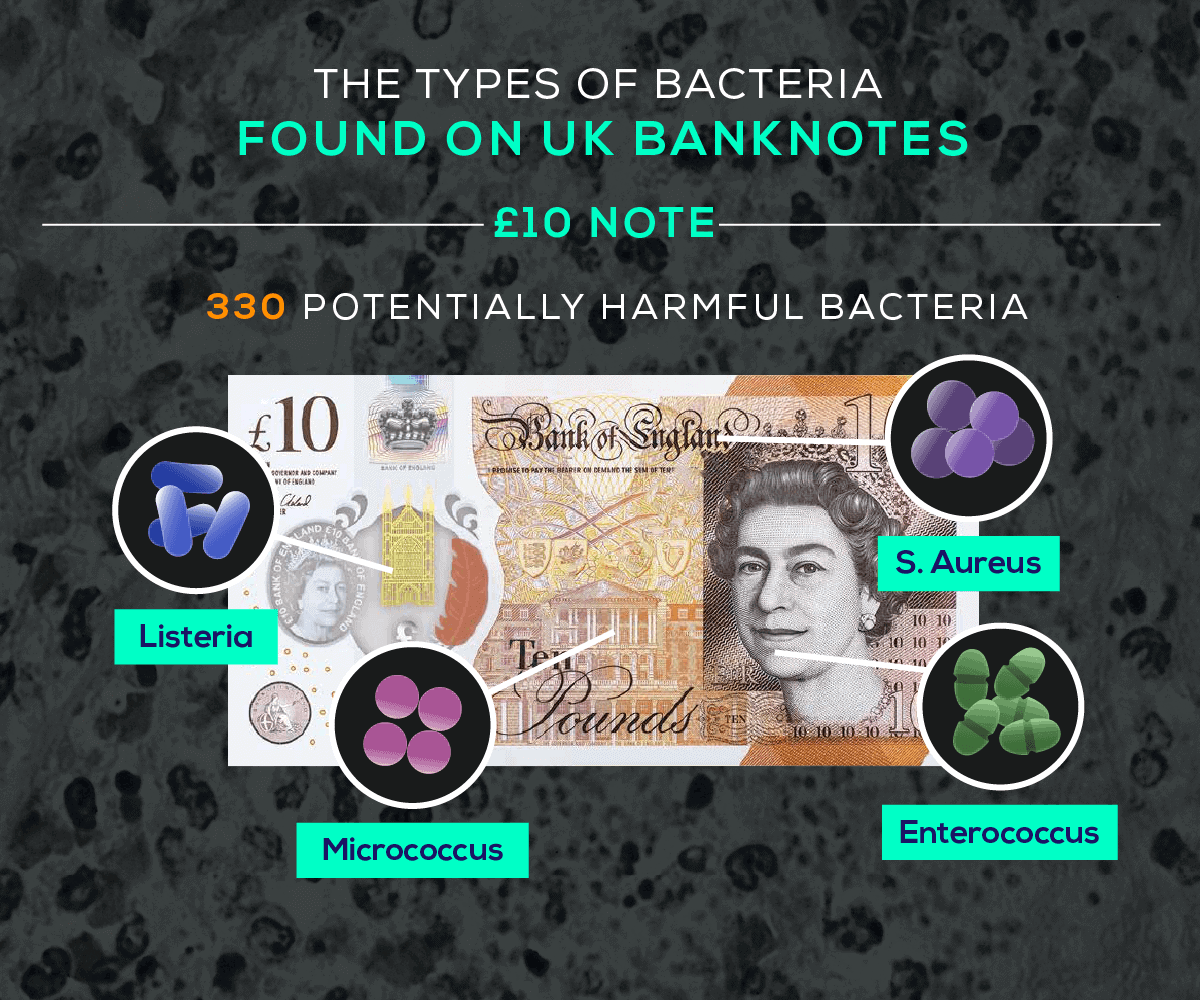 In the images below we can see the different kinds of bacteria accumulated on the average £20 and £50 note. According to the research, these two bigger denominations have a longer lifespan of 20 years and the total number of hands touched 10 and 4 respectively.

Bacillus Pumilus, a type of bacteria that is mainly found in soil, can be found on both of these banknotes. This bacteria is particularly dangerous for children and can cause skin infections. 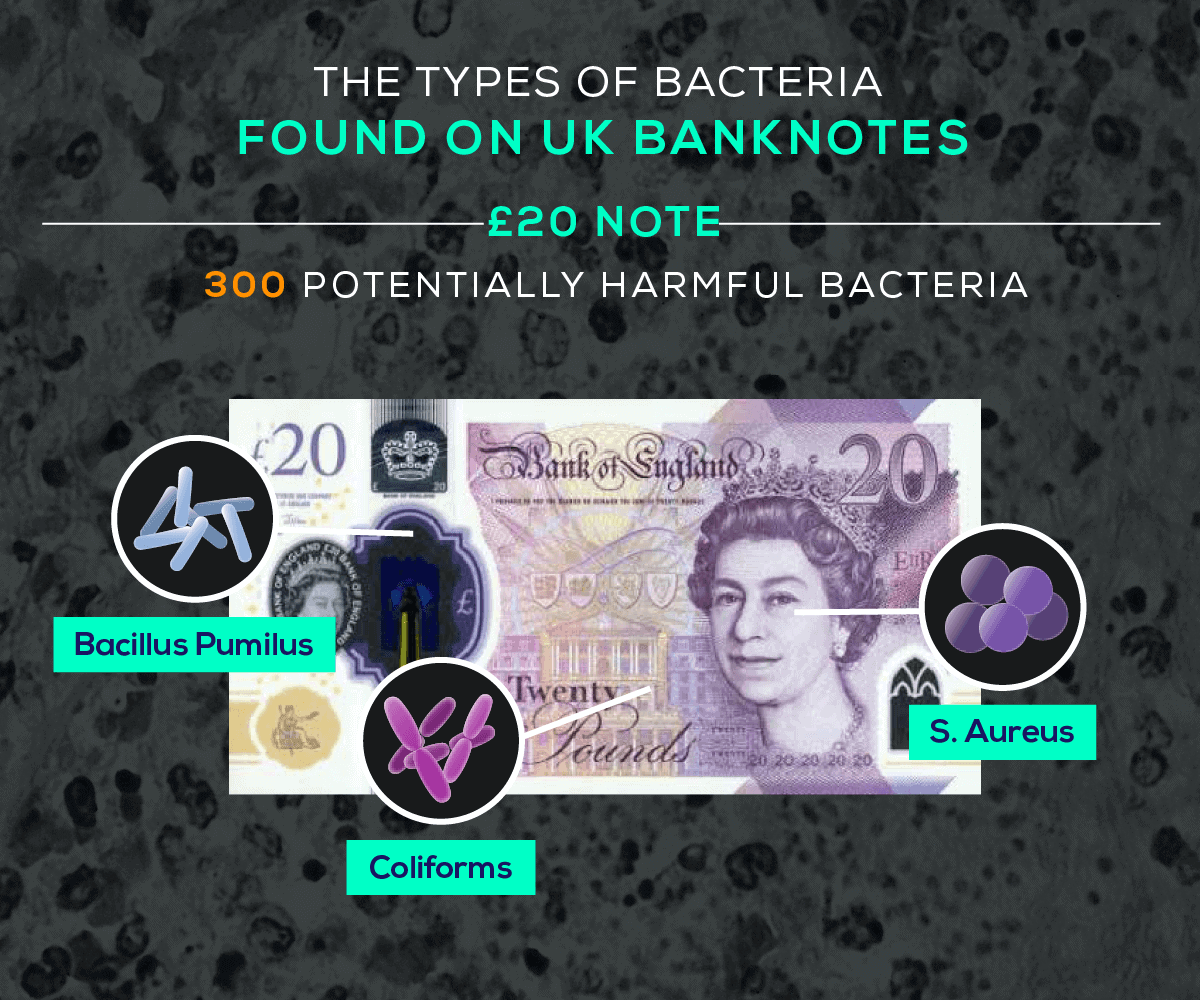 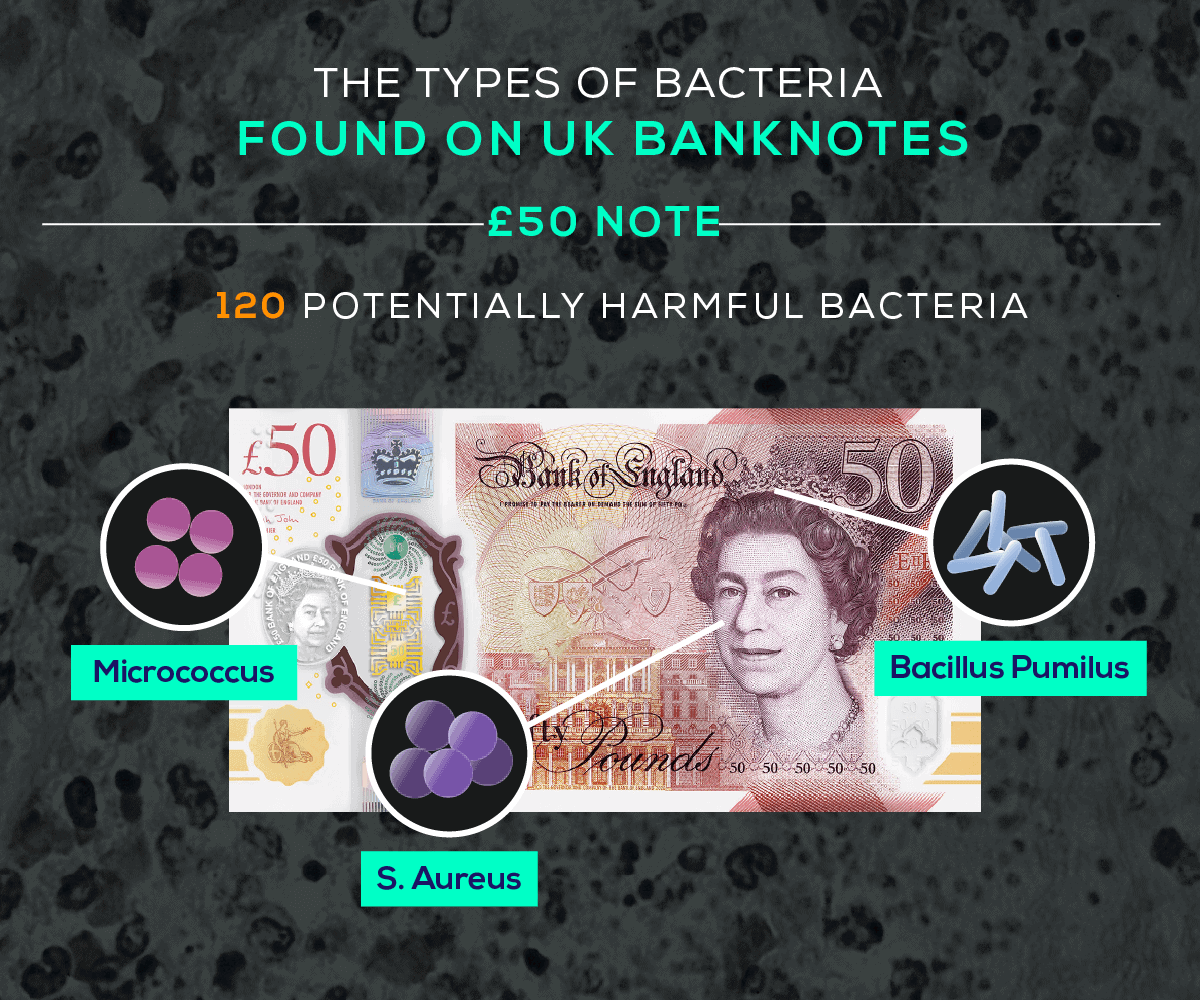 The image below illustrates and describes the types of harmful bacteria you may find on different UK banknotes. 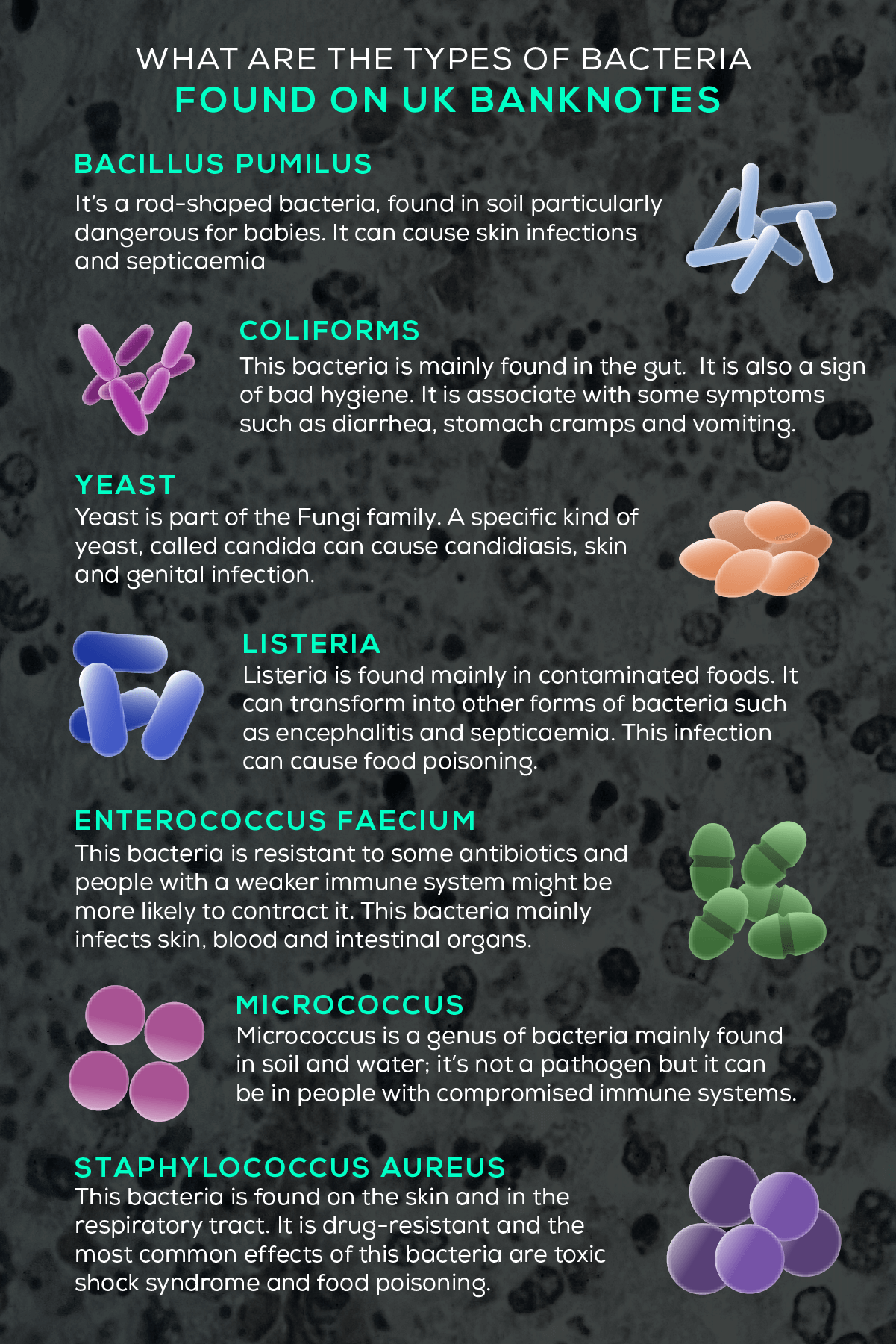 The $10 bill is the dirtiest banknote in the US

From the findings below, we can see that not always do the lower denominations correspond to a lower velocity. In fact, the $5 and the $10 bills have the highest velocity and number of spends in an average of 5 years. This makes the $10 the dirtiest dollar bill with 16,344 types of bacteria accumulated in 5.3 years, 165 of which are potentially harmful.

We then divided the estimated value spent in each form of note by the total amount in circulation to give a velocity for each note denomination. We also found the estimated lifespan of each one of these notes.