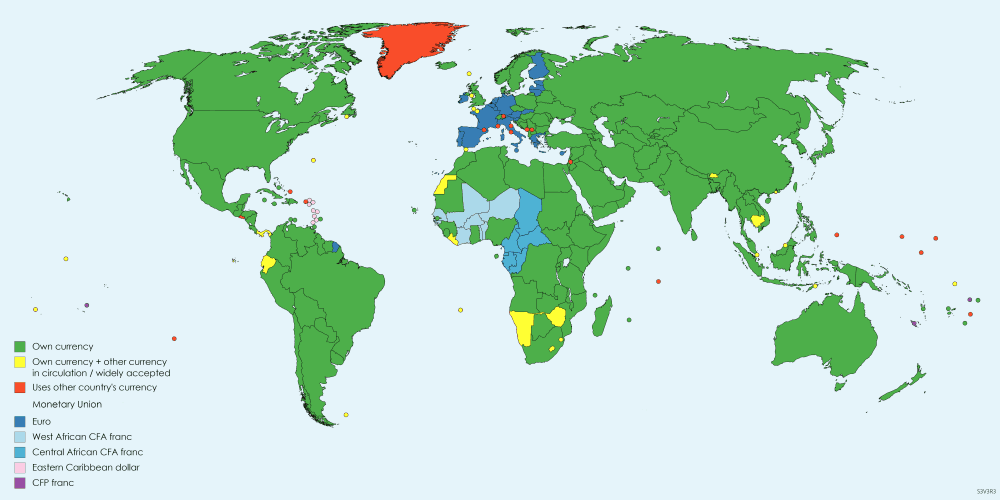 The map above shows which countries use their own currencies and which don’t.

The best known example of countries not using their own currency is the Euro, which is used by 19 of the 28 member states of the EU. These are: Austria, Belgium, Cyprus, Estonia, Finland, France, Germany, Greece, Ireland, Italy, Latvia, Lithuania, Luxembourg, Malta, the Netherlands, Portugal, Slovakia, Slovenia, and Spain.

However, the Euro is not the only example of a currency used in multiple countries.

Other countries will sometimes use their own currency but also allow have other currencies that are in wide circulation / widely accepted (often US Dollars, Euros and/or neighbouring country’s currency).

And in case you’re wondering how the map above was arrived at, reddit user s3v3r3 provided a detailed explanation:

First of all, the criteria that have been used to decide which countries and territories go into which category (or get shown on this map at all): these are current UN member states plus some non-member states (Vatican, Palestinian Territories, Western Sahara, Cook Islands, Niue), as well as those dependent territories that either have their own currency or use a currency that is different from their sovereign state’s currency. I chose to ignore those currencies that are minted or printed only as commemorative banknotes or coinage, which, while being legal tender, are not used in day-to-day commerce.

So, the categories are as follows:

Own currency + other currency in circulation / widely accepted (14 countries + 10 dependent territories); some subcategories can be singled out:

Countries that don’t have a currency of their own and instead use another country’s currency (12 countries + many dependent territories):

Many of these independent countries are either European microstates (Andorra, Monaco, etc.), island nations (Nauru, Palau, etc.) or just small countries choosing to adopt some world currency, usually euro or the US dollar, as a matter of convenience (Montenegro, Kosovo, El Salvador);

As for the dependent territories, I’ve shown only those that use some third country’s currency that is different from their sovereign state’s currency (e.g. British Indian Ocean Territory, Turks and Caicos Islands, and British Virgin Islands are all British Overseas Territories that use the US dollar instead). For practical reasons, I didn’t show those dependent territories that use its sovereign state’s currency – except for Greenland, which is too big not to show on the map. I like it nice and red.

A note on the two CFA francs: the CFA franc was created in 1945 (there’s a long story to how and why this happened) and was set at fixed exchange rates against its French counterpart; both CFA francs are now fixed against the euro, and are guaranteed by the French treasury. The two currencies are widely assumed to be at parity and effectively interchangeable across all 14 countries, but they have different monetary authorities, so in principle they are separate currencies.

Sources: this list was the starting point. National banks websites and other online sources to check the up-to-date status. There might be some obsolete information, so any corrections are welcome.

Enjoy this map? Please help us by sharing it.